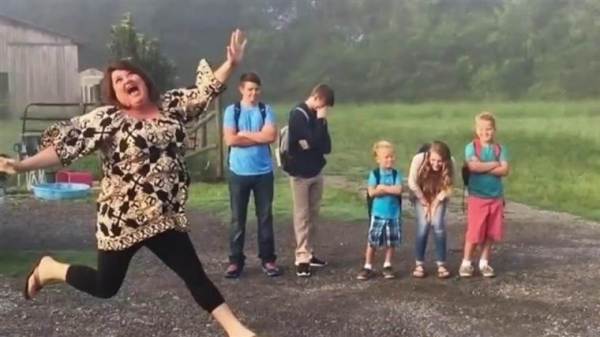 In honour of the parents who have survived the school holidays…(just) I thought I’d share a few things that you will never hear come out of a parents mouth at this time of the year. And if you do hear them, I promise to run naked around Manchester in disbelief…although trust me, after all the sweets and kids’ leftovers I’ve succumbed to over Summer that wouldn’t be a pretty sight!

Quotes you’ll never hear come out of a parents mouth:

So here’s to normal service resuming, at least until the October half term…

Well the current heatwave must have sent me delirious because this week I succumbed to my children’s pleas of getting a paddling pool. If I’m honest it took days of trying to placate them with ice lollies and witnessing their overheated tantrums that made me give in, along with a sunny gin fuelled afternoon where I would have easily said yes to anything!

It was only a paddling pool request after all, it wasn’t like the time they asked for a dog, cat, furby, hatchimal…this one we could probably manage to do.

Oh boy was I so wrong!

Firstly, let me explain how hard it is to buy a paddling pool when all the other parents out there are being badgered to do the same thing. The words ‘out of stock’ almost became a mantra until hurrah, Argos came to the rescue with the last paddling pool in stock. By this time my budget had gone from spending just £20 to ‘I’ll pay whatever it costs JUST GIVE ME A GODDAMN PADDLING POOL!’

Triumphant in my quest I raced home to set it up to surprise the minions after school. This was at 1 o’clock, by 2.45pm I was still sat there trying to blow it up, about to pass out from boredom and heat exhaustion. Note to self, do not be tight, buy the pump that is recommended to come with it rather than use the super slow foot pump you’ve had since you bought your first car (which was in black and white days)!

There will be some of you nodding along in sympathy with this I’m sure-yes you’ve been there AND felt the pain of realisation that once it’s finally pumped up-you have to FILL it up!

Well, I have to say it was all worth it for the screams of delight from my two little cherubs as they burst into the garden then ran up to their bedrooms to change into their swimwear. Cut to 10 mins later though when the oldest one has branded it ‘boring’ and my youngest peed in it and then complained that the water was too wet.

With the kids back inside watching TV and playing ‘MarioLand’ there was only one thing to do, yes, I dived in to the yellow tinged water with my Prosecco ice pop (a revelation by the way) and enjoyed the sunshine.

So, make use of the paddling pool whilst you can because after all by this time next week we will either have the rain back or a hose pipe ban in place. Good look trying to get the thing back in the box when you finally deflate it too, I can guarantee it will end up in the green bin – but, just like childbirth, next year the pain will all be a distant memory and we will do it all over again!

Like most parents with school age kids I’m gearing myself up for that time of the year when they come home with a ‘project’ to do. Yes, that moment when they present you with a mammoth list of things they need to build/create that usually require you to do more work than them. And then there’s the competitive element you get dragged into…

“Little Johnnie in class 3B is doing a project on astronauts and he’s going to NASA space station in America with his parents so he can do some research.”

“Libby from class 4A is doing a presentation on the Ancient Egyptians. She is dressing up as Cleopatra complete with an Asp that her Mum and Dad have loaned from the local pet shop.”

Now, whilst I might be exaggerating here, there is a lot of truth in the extent to which some parents go to to make sure their ‘mini me’s’ are top of the class.

Like the time I experienced ‘House-gate’ when my little girl was about 5 years old. She came home with a task from the teacher that said she had to ‘describe your favourite room in your house and why. You can use pictures or be as creative as you wish.’

Well, of course, in my head the words ‘if you wish’ meant just one thing – you didn’t have to go overboard if you didn’t want to. So, I actually felt proud of myself on ‘hand in’ day when my daughter had completed not just written words but an accompanying picture of her bedroom (coloured in no less)! That was until I reached the playground…

As if in slow motion one of the kids from my daughters’ class walked past me with her parents in tow, all 3 of them were holding up what can only be described as a mini house. Other parents’ eyes also followed them. We were all in awe, disbelief and pretty much mouthing the words ‘WTF?”

Yes, there’s always the one that goes that EXTRA mile and this particular family had created not just their kids favourite room but their HOUSE. Plus I later found out, (after quizzing my child at dinner), that their model also had carpet in it – the SAME carpet from their actual living room. How the hell do you compete with that??

Since then though I’ve upped my game and like to use the ‘ageing a piece of paper to look like old parchment trick’.

Step 1: spill black coffee over a piece of paper

Step 3: crumple it up

I want to just leave you with one final thought for now…does anyone else think the Tooth Fairy has hiked up her pay outs?

According to my daughter the plucky pixie left a £5 note under the pillow of one of her toothless friends recently and now she thinks that is the going rate! Unfortunately ‘Tink’, as we like to call her, was strapped for cash when she visited our house so left just £3 (made up of lots of loose change). Although she did leave our daughter a lovely coffee stained, crumpled note to make up for it…

It’s been one of THOSE DAYS…

It all started off quite well. I’d managed to put my knickers on the right way around and drunk at least half a cup of coffee before it went cold – you could say life was sweet. For once I WAS that Stepford wife, I’d put a wash on before leaving the house and I was taking the terrible twosome (aka the kids) to a play centre as a motherly treat. The sun was even shining, I should’ve known from that omen something was bound to go wrong.

Kids in the car. Check.

I hear an almighty clunk and then I panic. ‘What was that Mummy?’ That, my inquisitive 7- year old is a big hefty hole in my purse (that’s what I wanted to say but I took a deep breath and pulled over). Phew, no sign of real damage. Relief.

Stepford Wife is back in the game.

We’ve got Dua Lipa on the stereo (god knows who she is but my little girl seems to know every lyric), and my little boy is happy getting to grips with the Chupa Chups lolly that I know I will regret giving him later.

The play centre was a dream; no nose bleeds, no weeing in the ball pool, and I was only asked once by my 3-year old son to slide down the snake that really wasn’t meant for a 30 something.

I survived. I am invincible. I spoke too soon.

I came out to a FLAT tyre. Not just a FLAT tyre, a totally wrecked one! The good news was we were right next to a Kwik Fit – the bad news was I still had the kids in tow. To be fair I still had snacks to bribe them with and the saviour of an iPad. But then, it happened. Whilst stepping out of the waiting room to inspect the replaced tyre I suddenly heard my name booming over the Tannoy system and the words  “could you come back in, your son is exposing himself in reception”.

Oh. My. God. I ran inside like Paula Radcliffe in need of a wee – and there he was waving his ‘winky’ proudly about, laughing.

‘Put it away’ I said frantically whilst pulling up his pants.

‘He’s NEVER done that before’ I insisted as the other customers smiled in disbelief.

So, spare a thought for me next time you swerve to avoid those pesky potholes, thanks to them I’m to be forever known as ‘the woman whose son waved his winky in Kwik Fit’. 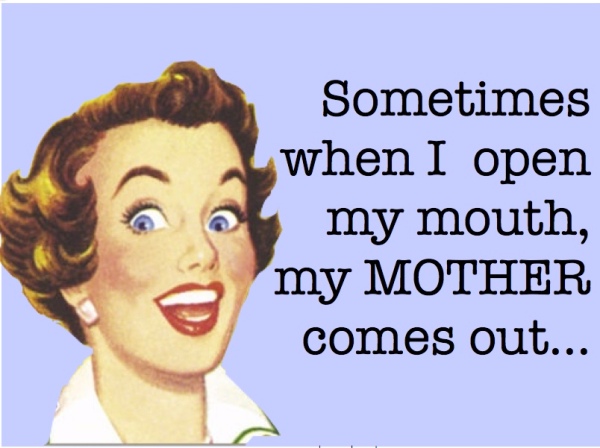 We have been informed of an outbreak of Meta ‘Mum’ Phasis. It’s quite contagious and is something that can affect all Mums at some point in their life, some sooner than others.

What is Meta ‘Mum’ Phasis?

The moment you realise you have turned into your mother!

Early warning signs include verbal ‘Mum’ diarrhoea to your kids, such as…

How long does it last?

Until the kids turn into teens and you enjoy a mid-life crisis phase and start wearing over the knee boots and dancing inappropriately on tables at nightclubs frequented by 21 year olds!

If you think you or someone you know has Meta ‘Mum’ Phasis act quickly, common symptoms can be reversed, through good friends and support.

Meta ‘Mum’ Phasis  –  together we can wipe it out!